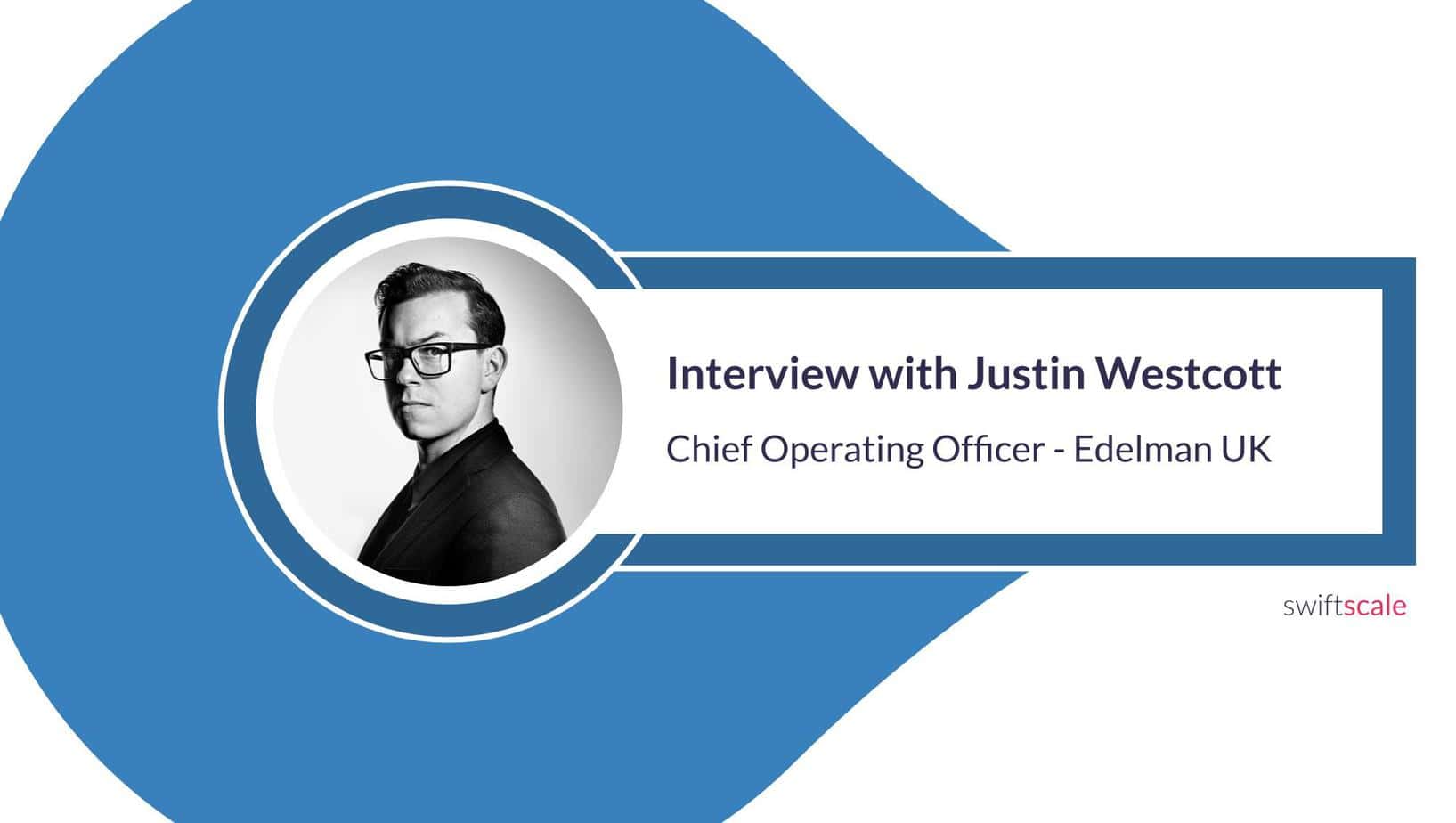 Executive Insights are a series of discussions with c-suite executives from a range of industries, to learn about their roles and the part that digital transformation plays within their large organisations.

With 600 UK staff sent home in March 2020, it meant a big operational adjustment for Edelman, as well as a re-focus on the importance of investing in people. In this interview, Justin Westcott, COO of Edelman, reveals how the pandemic has accelerated the company’s mission to move towards a global operating structure, and emphasised the importance of employee wellbeing, an area that’s seen improvement thanks to the application of scaleup tech focused on employee engagement, health and productivity.

Please explain a little about your role at Edelman.

I have two roles. My main role is Chief Operating Officer for Edelman UK, the largest international office for Edelman outside of the US. We employ just over 6000 people in 65 offices around the world, with London being our second biggest office. I have responsibility for a team of about 600 people, who would usually all be sitting in an office in London, but they’re of course currently sitting in 600 offices around the UK!

The other role I have is as Head of our Technology sector for EMEA. Given that Edelman is a communications and marketing agency, I do a lot of work helping to drive communications for large technology companies, such as Samsung, Microsoft, HP, but also scaleups and startups, which is probably how I first got connected into swiftscale initially. Sometimes on a potential advisory side to the companies in the portfolio. But it also became obvious that there was a cross opportunity, bearing in mind that we also are an enterprise organisation looking to get an edge through smart deployment of new technologies.

When you say you’re driving communications for large tech companies as well as scaleups, you’re of course working for them. I’d be curious to understand if you are also looking to procure their technology for use within Edelman?

Yes, we’re working for them. Edelman is weird because we’re large, we’re kind of the largest at what we do, but we’re still an independent family run business. It means that we can actually flex our business models to work with small clients. As a result, over the last seven years, we’ve, relatively stealthily, become the largest agency supporting scaleups to become famous and funded through smart communications and marketing.

However, we do also procure their technology for internal use. That’s part of the joy of being a very entrepreneurial family-run business. We find that we take a bit of a ‘test and learn’ approach and see how it works, before then scaling it enterprise wide. Because we’re a Microsoft shop our main operating tech stack is more big tech I suppose. But where we tend to work with smaller, more nimble, scaling companies is on the people side of our business, around employee engagement, wellness, and so one, as well as the tools that would help our people do their job better and could give them an edge, such as being more productive. Bearing in mind what I said earlier on, our business model is selling people for the hour. So if you can generate more for the hour, that gives you an edge. Or a technology that makes you come across as smarter, more informed, quicker to find an answer and so on. That’s where we look at how we can use technology.

With the majority of your 6000 employees now working from home, what has that meant for Edelman as an organisation and how has that impacted your role?

Well, hugely. It’s made my role a bit more challenging because I don’t get to walk the floor and see everyone in person and to check in on how they’re doing and feeling, nor can I have those valuable serendipitous conversations that can keep things moving, keep us feeling a little more productive than we actually are. So that has been particularly challenging.

It’s a weird one though, because technically we’ve been productive. We’re hitting targets, the business is growing, and so on, but we all realise that it does feel hard. So whilst we’re hitting metrics and people may think we don’t need an office anymore, I think we all know we so actually need an office. Sometimes for just the social cohesion that you get from being in an agency, for the culture you build, which is really important for an agency like ours to distinguish ourselves. So much of it is the culture which an office plays a really important part of, to set the attitude and the atmosphere.

The other challenge is that we are, after maybe a bit of a slow start with the impact of Covid, actually growing and business has been good, particularly in the last six months. Therefore, in the space of the last year, just in the UK alone, we’ve probably onboarded ~50  people who have never been in our office, who probably would struggle to really get the full understanding of the organisation they’ve joined. We’ve had to work quite hard thinking about employee engagement, onboarding, social cohesion and how to use technology to create opportunities to connect people.

A main aspect of my role is really thinking about the wellness of my staff and considering just how challenging this period has been. Take work aside, it was like a surround sound of anxiety, particularly in the first six months. This has been a very stressful time when you then throw on top working parents, poor internet connections, shared coworking in shared accommodation, and so on. There’s been an awful lot to contend with, and there’s no instruction manual!

In terms of all these things that have really grown in importance, as you said, social cohesion and employee collaboration, has that helped to accelerate the digital transformation efforts within Edelman in a way?

I probably would say to a degree. Had the pandemic happened almost 18 months earlier, we would have found it much harder. But during the previous 18 months, we’d already gone fully onboard with a Microsoft cloud infrastructure. We’d already been able to get a good cultural understanding of things like Microsoft Teams. For an organisation of our size, I think we did quite well. So when we suddenly had to work remotely, we found we could without much disruption.

What we have done during this time is kick off our own transformation, which partly is enabled by digital, but is more about who we are as a business. It’s the same thing we were doing anyway, but we just accelerated it during this period. This includes changing our operating model, moving towards a global operating structure as opposed to a local one, and becoming more of a client-centric business. All are big shifts, but we’ve felt that now was the time to do it. The fact that our business has also been performing without physical office space, with the use of technology, is probably leading to a bit of a culture change. Certainly within senior management, where the office was seen as somewhere where you just need people to be. That’s definitely softening now as people are realising that the office should not be a factory for email production.

To follow on from this, what role do people and culture play in the digital transformation of an organisation like Edelman?

For a business like ours, we sell expertise which is delivered by people. That is our business model, that is everything. So for us, so much of our business is about attracting, developing and retaining the very best talent in the marketplace. That’s probably the main differential. Therefore, to your point around how important people are to the digital transformation? Well, critical to it.

In terms of the kinds of changes that were initiated as a result of everything that’s happened in the last year, such as adapting the operating model and thinking about who you are as a business, what’s your approach to actioning these changes?

For a business of our size, there’s nothing you can do overnight. We’ve used external consultancies to advise and shape and land the operating model and business model. We also do a lot of in-house and third party work around the technology stack that is building up behind that. As I said, we’re now a Microsoft shop, but surprisingly, despite the year we’re in, we were very paper-based and very spreadsheet-based for making and managing our business. So there’s a huge piece of work underway at the moment to move to one unified common view of our data that we are currently building on the Microsoft Dynamics suite.

My final question is about what you think the future of your industry might look like in the next five years or so. How do you see Edelman evolving over time?

A big question. A bit of side context first is that the whole world of advertising, marketing and communications is in a real wave of disruption. And it’s been massively heightened with ad blockers, the rise of social media, disimmediated audiences, fractured media and so on. We feel as a communications agency, storytelling, understanding culture and how you connect people is really, really relevant. Advertising agencies are now struggling. And what was quite an organised marketing mix has now become quite contaminated. We believe that we’re well positioned to win in that race.

So for us as a business, the next five years will be interesting because we are transforming to be something that is even more relevant than we are today, that will increase our current market share as we go after revenues that would have traditionally been with advertising and marketing agencies. It’s all really, really interesting. In order to do that, we’re going to need to be creative much faster and at scale. We’re going to need to be much more data rich and ensure that it’s embedded in the way we operate and the way we counsel our clients, and we need to increasingly attract and retain different talent.