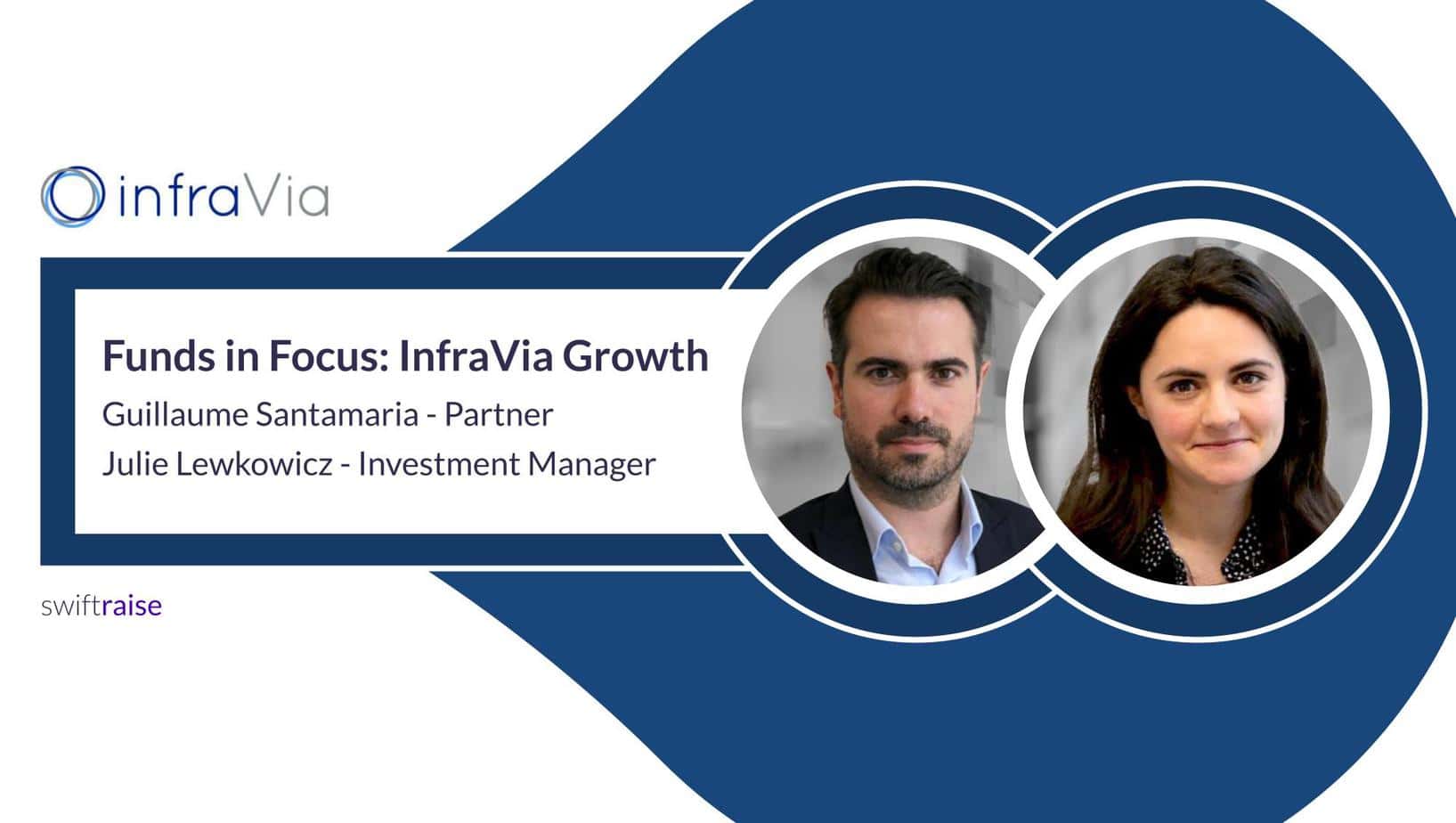 A huge thanks to Guillaume Santamaria and Julie Lewkowicz for letting me interview them in the midst of closing their first two investments! It was an absolute treat to spend the afternoon picking their brains and learn more about InfraVia Growth.

Back in May last year, a PE fund specialised in infrastructure investing (InfraVia Capital Partners) announced the first closing of a new fund aimed at the growth stage of B2B tech.

Growth capital for startups normally comes from the larger VC funds or corporate VCs (Highland Europe, Sapphire Ventures for example). So when PE funds get involved, the old adage, ‘you can’t teach an old dog new tricks’ comes to mind. But InfraVia Growth is different – a completely new team formed specifically with growth investing in mind, totally independent from the PE fund they share their name with. The fund was announced with €270m already committed with a target fund size of €500m. Fast forward to now, and InfraVia Growth have raised €400m and closed their first 2 investments.

We sat down (virtually) with Partner Guillaume Santamaria and Investment Manager Julie Lewkowicz, to shed light on the fund, their focus areas, and what they’re looking for in a portfolio-to-be scaleup. A huge thanks to them in advance for their time and willingness to share their insights.

How would you describe InfraVia Growth’s thesis in a couple of sentences?

“We invest in late-stage, B2B technology start-ups poised to become category leaders. We are looking for high-growth and scalable companies to actively help them reach critical scale. We do not provide only capital but are also hands-on investors, willing to bring added value, particularly with sales development, people development, strategic planning, M&A discussions and exit readiness.”

HQd in France, they are looking to invest between €10-50m in companies generating strong revenues (around €8m annually onwards). They’re focused on Europe, but looking for companies that have global potential. I’m intrigued to know more about their search for category leaders, and how they might be able to break down what they mean by that for founders.

“Categories are fields that are more or less the same in any country in Europe. As such, the solutions leveraging technology in these areas are solving very common, cross-border pain points. So when we look for leaders, we are looking for companies solving challenges in these areas, generating significant revenue from their core market and a strong opportunity for growth into others.”

There are plenty of funds who’ll invest that much money at that stage, so what’s the difference with InfraVia Growth?

Well, that was my perspective, and turns out I am quite wrong (on the one hand).

Their goal is simple – to fill a gap in the fundraising scene between Venture Capital and Private Equity. From their previous team experience, this is a gap that was evident to them and was at the very root of their decision to launch InfraVia Growth. As Guillaume explained, there’s two classes of company that are relevant to them:

In summary, there aren’t many funds who will invest the kind of money hyper-growth scaleups need, in fact it’s quite an underserved market. So that’s one aspect – they want to be there for companies like that who are suffering from a lack of available options.

On the other hand, they’ve navigated themselves into a total blue ocean of funding for  certain companies – where there is growth, but not at the pace the Growth Equity VCs would want, and where the profitability is there (or nearly there), but not established enough for PE funds. This stage of funding also carries the benefit of allowing companies to tidy up their cap table; investors who have been with the company for many years and are looking to cash out.

“We’ve built InfraVia Growth to serve these needs. It was our key and core reflection 18 months ago.”

The freedom to operate in this space grants access to invest in great companies that are overlooked by others, and it’s where InfraVia Growth is hoping to be known as the go-to fund.

What do founders need at this stage?

“When making our first two investments, we were incredibly selective, aligning ourselves with the companies to co-create clear business development, hiring, and M&A plans. If we can’t do this, it’s not a good investment for us.”

Investing is obviously hugely to do with literally funding a company. But it’s now pretty common knowledge that founders look beyond this, and ask what else funds can do for them and their business.

At the point InfraVia’s Growth team would invest, you might wonder what more there is to teach a founding team. Millions of pounds already invested, they’re likely to have built the employee base up, hired in a few seasoned experts for the management team and created a solid GTM plan that they are busy executing. So what can InfraVia Growth help with, where do they add value? We asked what the top 3 areas are that they look to get hands on with:

“1. International expansion, but with credentials. What we help our entrepreneurs do is get the credentials in the countries of interest for them. How? By getting them traction from very large, poster-child companies who don’t just provide them with revenue from abroad, but also a proof-point that the company and their solution is enterprise-grade in that country. That’s the kind of revenue that allows them to roll out across the market.“

“2. Organisational structure. When you start to roll out on an international basis, getting traction in the US, Japan, China, 5-10 countries in Europe, you need to be organised, you need to be structured. It’s very different going from €0-10m in recurring revenue than going from €10-50m. It’s not the same skills and not the same process. We have been doing this for many years, with an experienced team to provide playbooks, do’s and don’ts for this stage of growth.“

“3. M&A and non-diluting transactions. At the growth stage, these are more reachable, so we provide support identifying and executing these, either for buying technologies or buying market access.”

What’s going on with round sizes at the moment?

It’s been quite noticeable, just from tracking a few newsletters and websites, that raises in general are getting larger. Early stage rounds are definitely playing a part – the drive and strive for hyper-growth means it’s fairly unfeasible to raise a smaller Series C & D round than your A and B raise. So are InfraVia locking in for some big tickets?

“It’s fairly common across the board now. At the moment, it’s the new normal for Series Cs and Ds to be 30, 40, 60, 80 million. And when you go for more private equity style transactions, EBITDA multiples are the same – they used to be 10x, now it’s 20. It’s driven by company quality consistently improving, competition becoming fiercer, and founders being increasingly ambitious. The result is that more money is being raised to scale as fast as possible, which can lead to lower consistencies between revenue and valuation.”

CLNs and ASAs are becoming more common in VC rounds. At your stage, are those used and still of interest?

“We are going to end up with equity. But, are we able to start the investment off with a convertible? Sure. So we are happy to use them as a bridge or a way to engage with a company, especially if it helps to solve a valuation problem, but we will end up with shares.”

Boiled down, CLNs or convertible loan notes are generally solely there for companies and investors who cannot agree on a valuation. So at the growth stage, when revenues are well established and competitors / like-for-likes are likely to provide good foundations for a multiple, it seems odd that a scaleup raising would not have a clear and obvious market value.

“In the B2B world, especially at the growth stages, valuations are more rational. From our time on boards where we have experienced companies doing these rounds, and what we have noticed is that the spread in term sheets is not as high as what you’d see in the early stages or the B2C world. It’s very rare that there is more than a 20-30% difference between the highest bidder and the lowest bidder.”

Guillaume continues, “It’s very fair to say that we see more and more this kind of debt used, but in my opinion, this is still only a very low proportion of equity invested in scaleups. So they are useful, and could be seen as a bridge, but not as an alternative to classic equity rounds.”

Have the InfraVia Growth team had to learn new tricks?

The short answer is No. Because they’ve been brought in specifically with their backgrounds in mind to make sure they are right at home in this space.

Despite the ties to their PE parent, InfraVia’s Growth team has been built on strong VC foundations. The idea was to cover a wide span of expertise from tech related knowledge to deal sourcing and execution capabilities through operational skills.

Julie was part of the Investment team at DN Capital, scouting in Europe for them and brings a deep understanding of the early stage landscape and the most promising companies for the coming years. Raphael was an investment banker specialised in large tech private placements and IPOs, and has a strong knowledge in infrastructure software and cybersecurity deals. Romain joined from Cathay and helps raise their profile when it comes to the later stage or capital development style transactions. The partners also have long standing experience in growth equity investing, Guillaume from Quilvest & Idinvest, Alban from the software world (Idinvest, Dassault Systems), Nicolas from BPI France’s growth equity team, and François from the corporate world (Airbus Defense & Space).

InfraVia Growth are bridging the gap for scaleups between growth venture and private equity investing. They are looking for category leading companies with strong management teams who they can get hands on with and take to the next level.

This is not a side fund where the same team dip their toes into a new arena. The team has been carefully curated to execute on their mission. The result is that they are incredibly familiar and at home with the investments they are making.

We’re looking forward to seeing how they deploy the rest of the fund, and the future category leaders they back.